Australia’s food waste report card shows our bad habits are costing us billions of dollars and contributing to environmental decline. 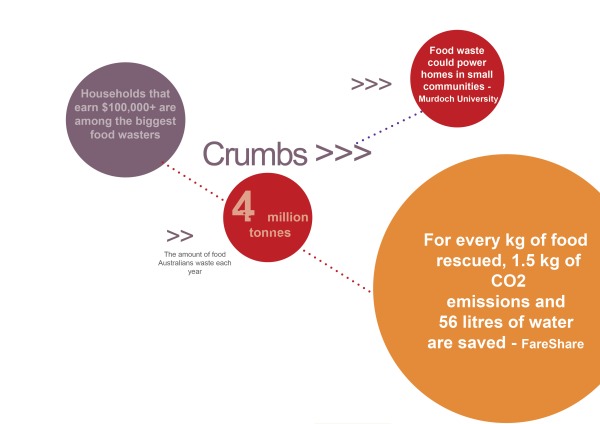 Some of the impacts of wasting food. Graphic: Jenan Taylor

An analysis of related State Government data shows Victorian householders throw away an estimated $4 billion worth of food, annually.

Even more staggering is that while up to 300,000 people go hungry, most of the food that householders bin is still edible.

Fresh food and leftovers, at 24 per cent and 18 per cent respectively, account for the highest amounts of food wasted by the average Victorian each week.

This is followed by packaged goods at 17 per cent, frozen food and drinks at 15 per cent and 14 per cent, while a fondness for fast food means we only discard 12 per cent of our weekly take away.

The most wasteful Victorians are aged between 18 and 24, followed by high-income households, while families with children are also more prone to throwing out food that is still edible.

Our state of waste

In his report on the impact of Australia’s food waste, Do Something waste expert Jon Dee found that Australians throw away 345 kg of food per household every year, which comprises approximately 40 per cent of the nation’s landfill.

An earlier study by The Australia Institute asserted that food in organic waste is largely responsible for creating greenhouse gas emissions in landfills and that the estimated levels are on par with those of Australia’s steel and iron industries.

Dee says that although dumped food generated methane emissions that are 25 times more toxic than carbon dioxide emissions, it is difficult to quantify the greenhouse gases being released, because authorities across Australia are still grappling with how to approach the problem.

“We actually know virtually nothing of how big the problem is. Unless we know exactly how much we’re wasting we can’t properly analyse the entire picture.”

Dee points to his findings that the nation as a whole is throwing away $8 billion worth of food each year, an amount he says is conservative because of the high variance in available data.

“The Victorian data is, I think, a more realistic indicator of the problem and because of that the national figure is probably double our estimate,” he said.